A noisy day on Brighouse Bay 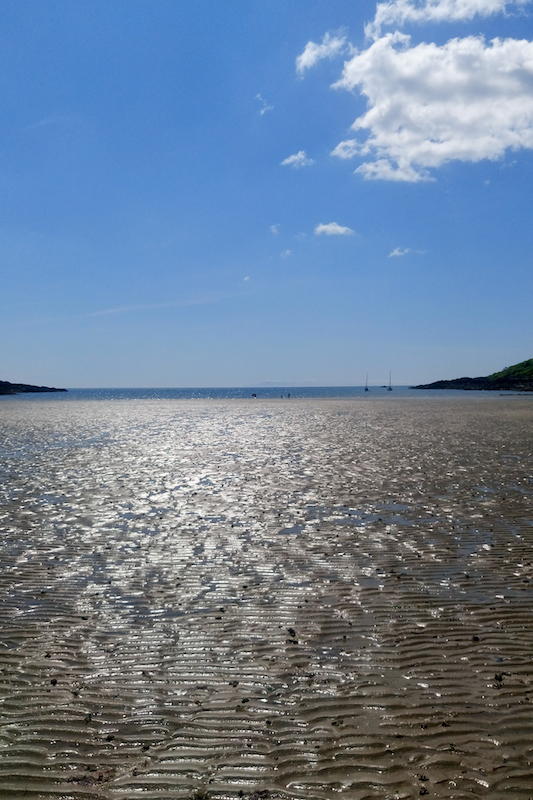 The blue was a hard, solid arc overhead, trailing out over the narrow bay and dropping down somewhere in the haze and sparks where sea meets sky. It was hot and this was paradise. Brighouse is a small, narrow bay facing straight out to the Solway Firth, bordered to the east by the hills of the Mull of Ross, hills that drop down on the other side to Kirkcudbright Bay. The tide was out, and the expanse of rippled wet sand was a good quarter of a mile, a playground for families and dogs and walkers, venturing towards the glimmering shoreline, careful not to go too far in case the tide turned.

Someone’s radio must be on too loud with the one o’clock news reporting from a warzone. The gunfire must be frightening for those people. But the gunfire goes on too long. It can’t be a radio or a phone; I’m too far from any other person to hear it if it was. The gunfire continues, long minutes, then a pause, then the rapid firing again. The gunfire is here, in this air.

It comes from over the hills, as if someone was firing down at us. My British reflexes are to assume it is unremarkable; don’t make a scene. My American reflexes say it’s a crazy person with an automatic; find cover.

And then, the heavy, earth-shaking thuds of tank fire, and I realise the sounds are soaring over from the Military Training Area, across Kirkcudbright Bay, across the Mull of Ross and dropping here. The fire is a rehearsal for war, a practice on a summer’s day. The rounds are landing somewhere else.

The air rattles, the sands feel unsafe, but no one else seems disturbed. No one is doing anything other than playing on the shore on a perfect day, digging in the sand, splashing in the pools, picking worms and broken shells. This society does not fire on its own people. The sounds heard through the news from some dusty, rubbled place, mean someone else’s danger, far away. Here, the sounds are supposed to mean protection.

The war sounds fall, like confetti, over the laughter of scattered children.