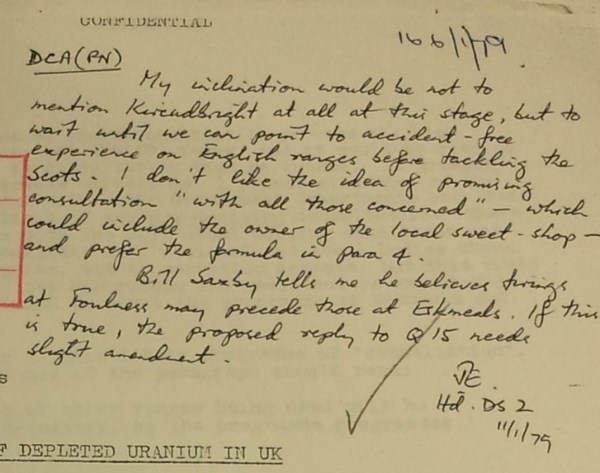 Notations on document from 17 January 1979

Freedom of Information requests and searches of The National Archive provided the evidence that confirmed the firings. The journalist Rob Edwards, in the Sunday Herald 6 November 2011, published a summary of some early government papers, 1973 – 1977, from The National Archive.

These exchanges show there was knowledge about the potential persistent contamination from Depleted Uranium dust. But what emerges also is the manoeuvring by the government and MOD to keep the firings secret from the Scots and the contempt with which the public was held.

A lighter note comes from considerations for re-naming DU, more in line with American efforts, to get away from ‘nuclear’ associations: Penetroy, Staballoy. The background demands of the US Military are evident.

Like the minutes of the DUFERC meetings, these snatches of government thinking provide background for the spoken-word text, a validation of the impunity with which these firings were undertaken.

Below are my selected highlights, with an understanding that not all the government communications are available and so these may not be wholly representative. Edwards’ article is here. The pdf of the texts is here.

I have seen the minute of 31 October from Secretary of State for Defence seeking agreement to the storage, development and trials of this ammunition, and suggesting that we should make a public announcement.

I accept that the environmental arguments deployed by the Secretary of State for Defence are very reassuring. Whether they will reassure the public at large, however, is open to some doubt: in Scotland at the moment; the use of the word “uranium” is sufficient to provoke resentment and suspicion. Much publicity is currently being given to anti-nuclear pressure groups and demonstrators who are conducting a campaign against the nuclear power station to be built at Torness in East Lothian. Considerable public attention has also been given to the geological investigation of sites in Scotland to assess their suitability for radio-active waste disposal.

If any initial evaluation firing programme is to be carried out at the Kirkcudbright range, no doubt this will be represented as further evidence that Scotland is being treated as a “nuclear dustbin”. I recognise that for technical reasons the Kirkcudbright range may have to be used, but for the reasons indicated I would want to be consulted about the form and detail of any announcement that is to be made.

The development and storage of depleted uranium ammunition in the UK is bound to arouse public interest for the following reasons:

17 January 1979 _ Paper to multiple government departments on announcing the firings to start in 1980 at Eskmeals _ Handwritten annotation to paper Signed ‘JE’, 11/1/79

My inclination would be not to mention Kirkcudbright at all at this stage, but to wait until we can point to accident-free experience on English ranges before tackling the Scots. I don’t like the idea of promising consultation “with all those concerned” – which could include the owner of the local sweet-shop … Bill Saxby tells me he believes firings at Foulness may precede those at Eskmeals….