The semiotics of danger 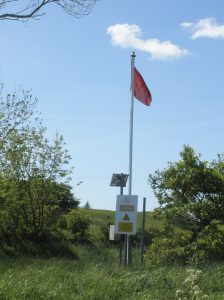 The first time you see the red flags, they both shock and amuse. Dots of red marking the periphery of the Ministry of Defence training area at Kirkcudbright, they stand at intersections between the roads around it and the roads to the interior. Here, in the verdant countryside, it means that war is being practised down that lane. No entry. You may be killed if you do. Red cloth, a wave and a warning. A primal message in this place; no need for words. In other places, of course, the red flag calls forth a solidarity in resistance.

Seen again and again, the flags melt into the ordinariness of the countryside, become an instruction as uncontentious as a traffic light. What is happening down that lane recedes from attention as other everyday concerns take over. With familiarity and habit, they can signify less about exclusion and more about the absence of curiosity for actions that always will be out of public sight.

These are signs of a conventional danger; if you enter, you may come within a line of fire, or something may explode and hit you. There is nothing that says ‘nuclear’ or ‘chemical’ hazard, nothing that indicates the possibility of an invisible, indeterminate, lurking danger.

The storage of nuclear waste in underground repositories raises problems of how to signpost these buried structures as places of danger and extreme toxicity. How should the materials below and their properties be signalled. Over the predicted timescales, there may nor may not be humans inhabiting the earth with similar sensory capacities to those now. [1] 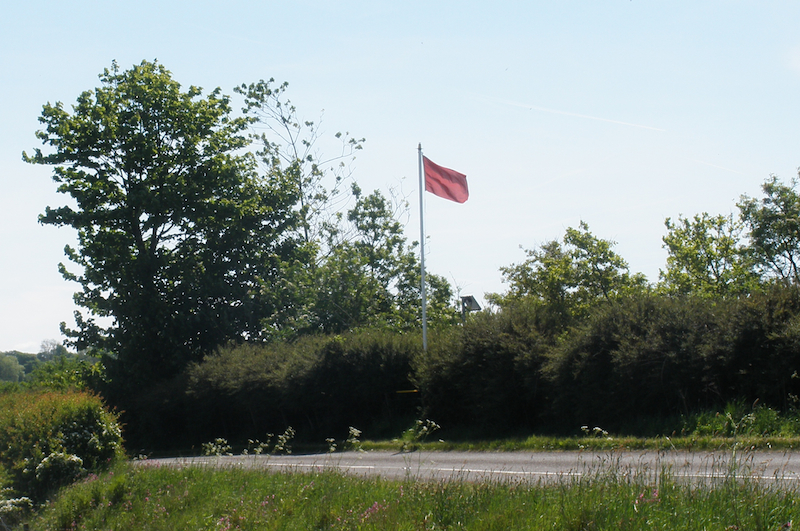 These are semiotics of the land.

The firings of Depleted Uranium into the Solway Firth, or any sea, offer a different kind of nominal problem. For these deposits, there is a presence without a place. Rather, the specific locations of the materials are unknown and constantly changing. The places disperse with the corrosion and drift of the shells, diffusing in unmarkable ways. The presence does not, for the human, come from a measurable, discrete entity, from a proximity, but is dissolved in unknown concentrations, adrift. The presence is more a function of human imagination, a being present in mind, memory and spirit, shifting around in differing concentrations.

Can something so far beneath the surface without location be marked? Or rather, like the unconscious, will it make its own markings, in its own time, on those that live above the surface.

If it cannot be marked, how is it to be remembered; into which archive might it fit?

The semioticians find that, for the depositories, there may not be any single image whose meaning of danger can be retained over millennia. It may be that the oral exchanges of narrative, instruction or song might last as well, as long as there are humans to utter and hear them.

Making an audio piece about these DU firings is not to attempt to make words that would endure as a reminder of exactly where something is buried. Rather, my intention is to make the news of the events exist in the sound of a human voice, and to begin to delve into that uncanny region through those human vibrations coming into the body.  There are no warning flags to mark this territory.