Being nuclear on the Solway 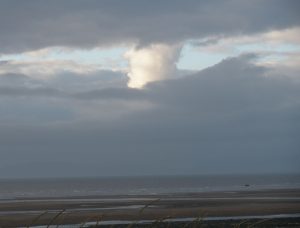 The placing of DU weapons in the Solway by the MOD placed the estuary, made it into a nuclear place. The firings brought the estuary into what the sociologist Gabrielle Hecht calls ‘nuclearity’, a technological and political condition of being nuclear.

Nuclearity is a condition that gets made. It involves human purposes. It is the political, economic, technological, cultural, historical circumstances of a place that shape whether and how radiation becomes identified as ‘nuclear’.

On the Solway, the source of radiation is known, but its locations are not and it cannot be definitively measured by human science. But it’s there, under the surface, beyond the senses, working away in the human imagination.

The ruse by the MOD that they were placing the DU weapons, not dumping nuclear waste, was more than a slithering away from responsibility and legality. These firings placed the estuary. They named it as nuclear.

They bring the Solway into what the sociologist Gabrielle Hecht calls ‘nuclearity’, a technological and political condition of being nuclear. Hecht studied the mining of uranium in Africa in painstaking empirical detail, and derived her theories on nuclearity from that; theories which apply, in part, to the Solway.

The nuclear bomb is an exceptional phenomenon; it created an immutable ontological distinction between the nuclear and the non-nuclear weapon. But, looking more widely than only the bomb, there are, according to Hecht, variable contingencies about what makes things nuclear, what conditions are nuclear, how do we know this and what are the criteria for being ‘nuclear’. ‘Nuclearity’ is Hecht’s term for the ambiguity of these unsettled, contested and changing properties. The powers of nuclear things depend on both their terrifying exceptionalism – and their banality, for example, in how the nuclear seeps into ordinary life as a manageable material, or as a tradeable product, or as a necessity for society.

Radiation exists as a physical phenomenon apart from humans. According to Hecht, for a place to be considered nuclear, that radiation has to be known about. It has to be detected, recorded and measured. It has to be brought into the calibrations of scientific parameters that characterise radiological conditions.

Continuing with Hecht, given radiation and the human activities to record and measure it, nuclearity is then a condition that gets made. It involves human purposes. It is the political, economic, technological, cultural, historical circumstances of a place that shape whether and how radiation becomes identified as ‘nuclear’, rather than, for example, merely mining or industrial production or waste disposal. An example from Hecht: it was only when the mining of uranium by workers in former colonial territories in Africa was recognised as being nuclear work, embedded in the global trade of nuclear products, and not just a variation on gold mining, that safety measures, of a kind, were legislated. Perceptions shifted; African mineworkers were seen in nuclear terms.

For Hecht, nuclearity is a category through which power relations are ‘constituted and refracted’. There are regimes of perceptibility that structure the production of knowledge about exposures and contaminations.  Disagreements and agreements about what is nuclear have political consequences; they structure the control of radioactive materials. They are the foundations of anti-nuclear movements and conversely, are the foundations of the civil-military nuclear industries.

In the Solway, it is not the dumping of conventional ordnance, which is extensive and ongoing, but the dumping of nuclear waste that initiates a nuclearity to this place.

What makes the Solway different is that the source of radiation is known, but its locations are not and it cannot be measured definitively by human science. But it’s there, under the surface, beyond the senses, working away in the human imagination.

To see a situation as being nuclear requires political and cultural work. From what I can tell, the work being done now is to ensure that the Solway is not seen as nuclear, that the civil-military nuclear zone of the Cumbrian coast is firmly around the southern headland. This is work done actively and tacitly by the Military, the UK government and many organisations promoting the Solway.

The nuclearity of the Solway, if it was to be admitted, or to be publicly made, would be unique. The radiation levels from these weapons may be low, less an immediate hazard than their corrosive properties as heavy metals. It may not be the measureable level of hazard, but the social, cultural and political dimensions of having a militarised radiating force below the surface, set loose, that forms the particular kind of nuclearity. That particular nuclearity will be created through social and environmental actions, through political decisions, through artistic works. All that the sea means, the science, the dreams, the adventures, the imaginal life, the elemental and the more-than-human, would be inherent to an acknowledgement of what is there. Transformation, transiency and endlessness. And perilous tides.